The seconds before shoting, visualized

I took the chance of looking into the "Advanced" data set for learning something of the ggplot2 package (I have been doing my visualizations with lattice until now.)

So here's what I have done.
I looked at where the ball was up till 20 seconds before a shot was attempted.
Click on the picture below for an enlarged version. 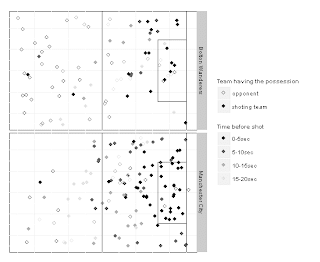 I don't have much to comment on this chart, except that I suppose it could be useful having this kind of visualization (or animated heatmaps) for a full season of data. That would allow to see where the action begins for a particular team (or for teams playing against a particular opponent.)

Below the same chart, with lines added for plays leading to a goal. 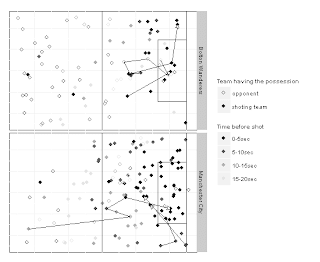